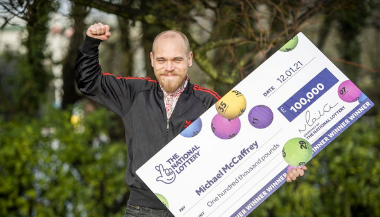 An aspiring businessman started this new year with the proliferation of a lifetime – a £100,000 scratch-card win!

34-year-old, Michael McCaffrey from Accrington was out shopping and decided to purchase National Lottery Christmas Countdown Scratch-cards. It wasn’t until a little while later that he remembered he had purchased them!

“I had been to the local shop to get some bits and bobs and was literally walking out of the door when I remembered I had a couple of scratch-cards which I had bought earlier in the month and won a few pounds on but which I hadn’t yet cashed in. There was around £35 in winnings on them so I went back into the shop.” McCaffrey said.

“As I approached the counter, the Christmas Countdown Scratch-card really caught my eye. Christmas had come and gone and I thought I can’t leave that Scratch-card sitting there, so I bought five.”

Much to the Accrington mans’ surprise, his last-minute decision brought him a staggering £100,000 win. In fact, he was convinced that there must have been some mistake with the card. So much so, that he went as far as to call his mother for reassurance.

“I just thought this can’t be right. This sort of thing doesn’t happen to normal people like me. I kept playing mind games with myself and tried to convince myself that this just couldn’t be true. I even Face-Timed my mum to show her the scratch-card and said …. ‘Mum this isn’t a winner, is it…?’ I think she even started to doubt it herself,” Michael said.

McCaffrey went on to say that it was only after he called Camelot to confirm his win that reality actually set in.

“I was close to tears on the phone – and I have to confess that when I came off the phone I did burst into tears! This is just incredible and the win will make such a huge difference to my life and my business.”

Michael now intends investing a large part of his winnings in his car wrapping business, The Dapper Wrapper. He had previously left his job as a salesman and now has the opportunity to follow his dream and earn a living as an entrepreneur.

Apart from giving his business a satisfying financial boost, Michael has planned to treat himself to the car of his dreams too.

“It does feel like 2021 is going to be the year when all of my dreams come true.”

Will 2021 be the year that all your dreams come true? Perhaps this year’s luck will be on your side too. If you would like to try your luck and change your life, visit LettersScratch.xyz and buy tickets online now. Or have a look at some of our other Winner’s stories.