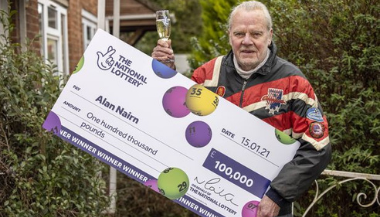 A Cardiff pensioner nearly lost out on a massive scratch-card win after misreading the numbers on his winning ticket.

An awful lot of zeros

Alan Nairn, a retired welder from Cardiff, almost missed out on an astonishing £100,000 win, but thankfully decided to double-check his ticket after noticing ‘an awful lot of zeros’

“I was looking for small prizes when I scratched the card and when I didn’t see those, I started to throw the card away,” Nairn said.

“Then I realised that there was an awful lot of zeros and took another look.”

Similar to many lottery winners, the 79-year-old stood in utter disbelief when he realised his unexpected change of luck.

“I couldn’t believe my eyes and kept the card for over a week before taking it to get it checked. I kept forgetting where I put it and was constantly rifling through old books to check it was safe.”

Alan, who was once a motorbike racer, hopes to finally get his bike back on the road this summer. And, while respecting COVID regulations, visit some of his favourite places.

Over the past few years, he has spent very little time riding his classic Honda VF-1000R due to the cost of insurance and in fact, spent more time maintaining it.

“I have looked after my bike for 37 years but recently, I had all but given up hope that I’d be able to ride it again”.

“Now though, after spending months only going to Tesco and to the Post Office, I’m looking forward to safer, warmer days and taking my bike to the Brecon Beacons and my beloved Tenby.”

Furthermore, Mr Nairn has plans to indulge himself in a new, working model- locomotive. He spent a considerable amount of time during lockdown working on large-scale models which he enjoys but is now keen for a new challenge.

He said: “This win means that after a tough year, I have lots of things to look forward to. I have lots of exciting plans for the money and I hope that I will be able to make some donations to causes I feel passionate about”.

“I’d also like to support the NHS somehow, put some money towards animal welfare charities and make a donation to a veterans’ charity which helped my parents after the war.”

Will 2021 be the year that all your dreams come true? Perhaps luck will grace  you too this year. If you would like to try your luck and change your life, visit LettersScratch.xyz and buy tickets online now. Or have a look at some of our other Winner’s stories.