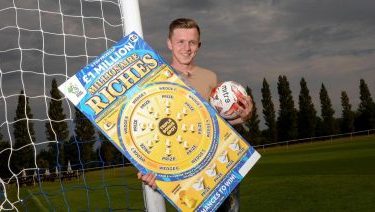 Jamie Heavens was an average 22-year-old with a construction job, a new wife, and a 9-week-old little boy. One ordinary day, he was on his way to work with his uncle when they had to make a stop for fuel. Little did Jamie realise that popping in to the little convenience store and choosing the wrong flavour Lucozade would change his life forever!

In 2016, Jamie was working with his uncle for the family roofing company. He was on his way to work when they had to stop and refuel the work vans. The first service station they stopped at didn’t accept fuel cards and so they rumbled along to the next one. Whilst filling up, Jamie decided to run into the convenience store to pay and grab a drink. In the queue he realised he’d got the wrong flavour and ran back to change it. As he headed toward the counter he saw that the man in front of him had bought the very scratch ticket he had wanted to get. Little did Jamie know that the wrong flavour Lucozade and the man buying the scratch ticket were all part of his changing luck!

He bought a £5 National Lottery Scratch card and headed back to the van to wait for his Uncle who was picking up breakfast at a fast food place next door. As he started scratching he realised he’d definitely won something but finished scratching before checking to see what his prize was. When he saw the £1 million symbol he sat in shock before jumping out of the van and leaping around, shouting for joy.
“I think the only time I felt more astonished was when my son was born,” he recalls.

His uncle, unaware of the ticket, pulled up and said, “You’re a bit excited for breakfast aren’t you?”
“When I showed him the National Lottery scratch card,” Jamie said, “I was forgiven my crazy behaviour!” At 22, Jamie Heavens from Bournemouth became a newly minted millionaire.

Jamie wondered what to do next. He couldn’t call Camelot (the UK National Lottery operator) as the phone lines didn’t open until 9am; so Jamie headed off to work. At work he struggled to get any signal and it wasn’t until he was working on top of a roof that he had coverage and was able to call. He’d already called his wife, and partner of four years, and was eager to prove to her that it was real.

“It doesn’t really sink in until the money hits your account.” Jamie said, “There’s a sense of relief that you can go and do what you want to do.”
It might sound like he went crazy with the millions but the truth is that, unlike most winners, Jamie has managed to hang on to his comfortable new life.

How Jamie Spent his Winnings

He and his wife splurged on a few things at first; a wedding, a car, a home. After that, they helped a few close family members and friends before saving the rest. Jamie still goes to work but now runs his own business. He says that he bought a couple of properties with no mortgages but otherwise not much has changed.
“Money makes you more comfortable but it shouldn’t change the way you live your life.” He says.

As a down-to-earth family guy who still works hard and leads a ‘normal’ life, Jamie’s life hasn’t changed much and he still has his close friends who buy rounds at the pub just like the old days. At 25, Jamie is still living comfortably and seems to have a damn good idea of how to handle his money. Pity not all young winners are sensible as this one – perhaps we could all learn from the young lad from Bournemouth!

If you’d like to try your luck and change your life, then visit LettersScratch.xyz and buy tickets online now.